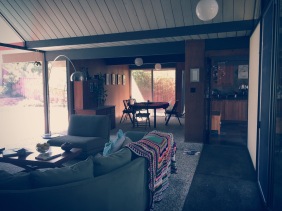 Can you imagine living in Whoville? Or what about Mayberry? If I had my druthers I’d live in The Shire; small but beautiful, idyllic and fruitful.  Safe.  I live in Thousand Oaks. And in Thousand Oaks I live in a neighborhood. And in this neighborhood I live in a house. And like all environs a house is an influence as much as it is a reflection.  This is similar to Plato’s theory of forms in which every form has its ideal of which it strives to be.

When I began looking for a new home, a new form, I started with my ideals.   As George Harrison succinctly and beautiful advises us, “All Things Must Pass,” so the house in which my wife and I made a family had passed.  It was now time to get along.  I was challenged, fascinated, discouraged, and even at times frightened.  Along the way I found myself asking why anyone with any sense of practicality, let alone sensibility, would have carpet in the bathroom?

On a Saturday, at the end of a tether, by happenstance my wife comes across an add in the The Acorn for an open house the following day.  So weary of seeing another granite countertop accompanied by stainless steel appliances and the coveted hardwood floors and vaulted ceilings, I rallied the troops and off we went to schlepp through another house.  Oh, look a Thermadore.  Over the course of months I was forced to imagine myself living in countless homes in countless neighborhoods with countless neighbors in countless scenarios.  I could be the man of the house with the “entertainers dream backyard,” or the proud owner of a “three car garage,” or I can have an en suite the size of a Roman bath.  Because, honestly, as Americans, and deservedly proud at that, we make everything absurd.  Tofu is good for us so lets put it into everything.  This type of behavior is reminiscent of Kierkegaard’s “Faith by virtue of the absurd.”  As a transgression, when are we going to start teaching that Abraham’s will to commit filicide is bad moral judgment because its murder, regardless of God’s will?  Can you imagine how different our fate would be today if Abraham said no?  Perhaps it would have been the first of many no’s that we should be saying.

On a sweltering day we go to the open house.  Now mind you that we are doing this by rote, so everyone should understand their roles.  But I still turn to the rug-rats sitting behind me and remind them to behave.  “Just don’t do it.  Because I said so.  This is not our house.  No Mark, you can’t take a dump in their bathroom.  Don’t touch anything.  Oh for the love of Cleopatra, just stay in the car.  I’ll be right back.”

We walk through the house.  As a family.  With two kids under ten who seem to know more than me.  While the kids helped themselves to the complementary fruit medley, I had the singular opportunity to wonder through the home.  Debbie acted as a go between touring the house and watching the kids.  I look at Debbie and repeat verbatim what a college friend’s father said to him the first time he saw the dorm room: “At least you don’t shit on the floor.” All in jest of course.  Over the years I have become accustomed to saying that because it seems so absurd to me that that was the first thing a father said to his son as he sent him off to college.

I’ve now had just over a year to take in the scope and breath of our move.  Undoubtedly we bought the house.  Thanks to the divine intervention of fate, my wife found it. An Eichler. A what? For most it’s those homes with the funky facade.  You know?  There is a sign on the corner of Lynn and Calle Manzanas that reads, “Eichler Homes.”  Still No?  Imagine yourself settling deep into a plastic sofa, with a martini in hand, and a cigarette between your lips, spending a leisurely evening spinning Sinatra records.

Eichler homes are architecturally and therefore historically significant.  Joseph Eichler’s planned neighborhoods were for everyone.  Unfortunately there aren’t many of them so his dream remains allusive to most.  Some will argue that his design was too esoteric to appeal to the average aesthetic.  To this day I firmly believe that home building has made no compelling advances beyond boxy rooms, narrow hallways, unnatural lighting, conflicting architectural styles, and the all too prominent garage that seems to be the focal point of the home’s front (being that for most the car is the single most coveted gizmo besides the television, and since the advent and proliferation of both our homes have since been designed to make them the centerpiece of domesticity).  And what’s the deal with postmodernists that insists on the combination of discordant styles and ornamentation that is flagrantly non-functional? A sponge painted salmon colored Corinthian column!  Really?  I’m bewildered and dumbfounded that new home construction ignores the practicality of such Eichler elements as natural light, open floor plans and above all, a genuine understanding of how to utilize space that promotes peace and harmony.

I’ve lived in such memorable places as The Somis House, The Dump, The Rio Bravo, The Chocolate Factory, the Albion House two doors down from a crack den.  Now an Eichler.  So who cares?  We should.  Our homes impact us in the profoundest ways imaginable.  As I said earlier, “they are as much an influence as they are a reflection.”  By that I mean our homes influence our mood, our health, our attitude, our actions.  They are also a reflection of their own influence upon us.  We are our environment and what we make of it.  For us to be civilized our homes, our towns, or villages, or metropolises must nurture healthy living.

Besides doing my best thinking in the car and on a solemnly walk with the dog late in the evening (all thoughts being lost before I can write them down), I’ve had enough time to think about the home I live in and its influence.  I’m certainly not the person I was before living in this Eichler, let alone the person I was just a minute ago.  These thoughts are generated from experiences that are translated into actions.  For the most part the Eichler experience has and continues to be impressionable.  I’m at ease here.  I want to go home at night not because I’m anxious to leave work….that I am.  It’s because my family is at home.  The kids that I bought at Costco are at home and that I consistently remind I can return.  My stuff is at home.  The moment I roll up to the driveway there is a powerful feeling of relief because I want to be here.

The Thousand Oaks Eichler Community, otherwise known by my children as “Eichlerville,” is a visional experience.  Each home is a living incarnation of Eichlerness that is uniquely interpreted by its owner. Your eye wonders across its beeline front, clean curves, bright contrasting colors, and its ambiguous doors. There is something very allusive about an Eichler because the outside reveals very little of what’s behind it. Eichler incorporated an atrium as a center court. Imagine a square donut. The front door leads to a private outdoor experience that continues throughout the home.

There’s a mind-boggling amount that has been written about Jospeh Eichler and his homes if you’re interested.

The Thousand Oaks Eichler community, like the incorporation of the city itself, is fifty this year. This year the Eichler community may qualify for California Historical Register. Today, Sunday, the neighborhood celebrates with a block party (several home owners have graciously agreed to open their home to tours).

I encourage us all to preserve what positively defines us. My hat off to post modern living and Eichler whom unknowingly gave us something infinitely more important than just a house. He gave us an experience.