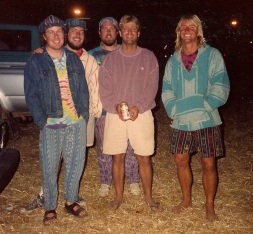 My name is Brian Stark, and I’m a Deadhead.

Maybe I’m dating myself, or maybe I’m making a confession, but I’m a Deadhead. Although the Grateful Dead as a full band have been gone for a decade, the years I spent immersed in their music and traveling circus will be with me forever. I was a relative latecomer to the party, but from about 1985 through 1995 I was pretty-much plugged into the Dead full-time.

My first attempt to see them live was in 1986 at the Ventura County Fairgrounds. I had tickets ready and had managed to get the day off work, which was a chore. I worked for Adventure 16 in West LA, and since all the employees were going to the shows, you had work within a schedule that would keep the store open somehow. As a newer employee, I only got to go to one show. The day of the show finally came, and that was the day Jerry Garcia went into a diabetic coma and the show was cancelled. I didn’t stop trying though, and I eventually attended about 100 shows in the ensuing years, and collected hundreds of live shows on cassettes (remember cassettes?).

Unless you were there, it’s likely that you wouldn’t understand what the deal was all about. I’ve met hundreds of other Heads over the years and there were as many reasons to get into the scene as there were Deadheads. For me, the band’s lyrics and musical style hooked me quickly. Somehow it seemed that they were always singing just to me. Jerry’s guitar style also has a unique and hypnotizing effect. There was also a subcultural appeal and a feeling that you were part of something bigger than just an audience. I’ll be the first to admit that not every show had the same magic, but it was worth the trip just to see if you could be there when the proverbial sh*t went down. I am still a regular listener. Just yesterday at the office I listened to 3 full shows on the “Archive”. I can still listen to a snippet of a live show and tell you what year it was played, and maybe even the month.

Every Deadhead has their favorite era of the Dead, and has a favorite year. I’m one of those that gravitate to 1977. Specifically, April of 1977. That was the pinnacle of their sound to me. My favorite show is from the Auditorium Theater in Atlanta on April 21, 1977. Other favorite years are 1973, 1970, and 1989 (mainly because I was there). If you want to hear the Grateful Dead for the first time, or get reacquainted, head over to the Archive Site.

My days with the Dead gave me more than entertainment though. Here are some of the things I gathered along the way.

1. When my car leaves me stranded in the middle of nowhere, I never panic. Being stranded is just part of the journey. Once my friends A.J., Tim, and I had a breakdown at a rest stop on the I-5. We were in my dad’s old brown pickup. The place was full of heads on the way to shows at the Calaveras County Fairgrounds…none of which had any mechanical knowledge. We did finally get the motor running after parting with foodstuffs we used to feed hungry heads that tried to help. I remember AJ handing them a box of cereal out the window as we drove off. At another show I dropped the transmission on my old ’65 mustang a few blocks from the Oakland Coliseum. I was with my sister, it was her first show. We had to walk a mile or two through the roughest neighborhood to get to the show and just left the car behind. Today, I can handle any road emergency.

2.  I’m pretty good at not judging other people, and I feel thankful for what I have. I was part of the group I called the college deadheads. We traveled when we could get away and we weren’t living on the road for very long at a time.  Others lived on the road though, and they didn’t have the security we did. But, we all mixed at the shows. I met lots of people with different stories, but we were all brought together by a love of this band. When we were at a show, we were brothers and sisters. We shared and traded what we had even when we weren’t getting the best of the deal. Sometimes life is just about sharing and helping those that we can without the judgement. If you had a “miracle ticket” to share, you could be a saint for a day.

3. Somewhere along the way, I learned about the value of discretion. Not everyone sees deadheads as harmless, and that would include law enforcement personnel. So, sometimes you need to be discreet. I can remember going to shows with my brother and we would bring preppy oxford shirts to the show and leave them in the car. Before leaving the show, we would ditch the tie dye and change shirts so we could plausibly deny being at the show.

4. The human digestive system is amazing. I can’t tell you how many veggie burritos I ate after shows, and I lived to tell about them. One can imagine that these burritos were probably not prepared under the most hygienic conditions. The parking lot scene was always fairly dirty, and I never saw a health inspector at a show.