Having recently become an officially appointed alternate public representative for the Conejo Open Space Trails Advisory Committee, I was excited to attend the Committee’s annual volunteer work day on Saturday morning October 17th. I arrived early to meet committee members and help get volunteers checked in. I was very impressed with the organization and the speed and efficiency getting vast numbers of volunteers checked in. There must have been about 200 hundred people in total. Once checked in, volunteers boarded city buses to take us out to a new trail route between Lizard Rock (Wildwood Park) and the Hill Canyon Treatment Plant. Another large group was deployed on a weed management project nearby.

The crowd was separated into teams of ten or so and deployed to marked areas on the trail. The trail route had already been “brushed” (shrubs cleared) and the volunteers were creating the new tread. A contingent of trail construction experts affiliated with the Concerned Off-Road Bicyclists Association (CORBA) were on hand, along with rangers and COSTAC members to make sure the trails were being properly constructed. Volunteers were of all ages and a number of families came as a group to help out, and there was a great sense of camaraderie among all participants. This is what we at Chillin in the Conejo call “Conejo Spirit!”.

Since a spinal injury has left me fairly useless with a swinging tool, so I decided to man my little Go-pro and capture some video of the event; mainly time lapse videos of the trail construction. Here’s a clip of the highlights. 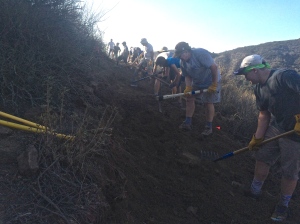